The human form negotiates an oceanic space. The figure swims and walks about the murky, underwater atmosphere. Choreography of the figure and of the camera works in concert with one another. Directionally, the camera follows the figure; when the figure moves, the camera moves. The viewer’s conception and perception of the space is shaped and disoriented by the motion of the camera and the water.

The body, clothed in a green screen morph suit, has been keyed out and exchanged with a video of iridescence on water. Tavi Meraud defines iridescence in terms of its “visual phenomenon, “ or “colors which change with the angle of incidence or viewing due to optical wave interference in the multilayer structure present at the wavelength of the scale underneath the surface” (1 Meraud).

In this piece, iridescence is a pre-articulated, constructed image within the .MPEG4 digital video format. The pixelated images within the screen-space of the video are digitized, working independently from viewing angle or light sources. Iridescence written in pixels contrasts the perceptions of iridescence occurring in real life. Meraud talks about iridescence in term of the image it produces: “To witness iridescence is to encounter a phenomenon where the axis of reality is perhaps no longer the mundanely given, but rather one that is shifted towards a heterotopic convergence of images with different degrees of reality, cohering into a single image: the apparent—the really apparent and apparently real—of the perceived shine” (2 Meraud).
Digital iridescence illustrates an illusory synthesis of real space, digital space, and the hybridization of the two. The visual phenomenon is flattened and reduced to the surface. The LCD screen exhibits a particular depthlessness inspired by Timotheus Vermeulen’s The New ‘Depthiness’. 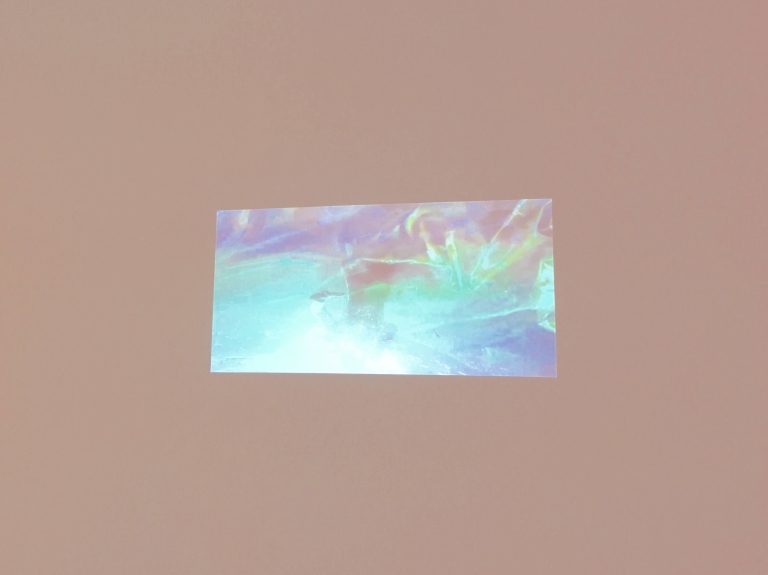